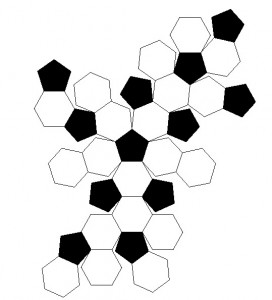 I began by making three panels with a pentagon at the center. What follows is a pictorial example of how I made the three panels.

First, I arranged five hexagons around one pentagon in a manner that I found visually pleasing:

Next, I put the right sides of two hexagons together and (with a slip knot already on the hook) inserted the hook through both loops of the chain-1 stitch of both hexagons. I then completed 11 single crochet stitches:

I followed the same procedure for the next three seams:

To complete the fifth and final seam of the ring, I folded the unclosed ring in half and joined as pictured. After this seam was joined, the ring did not lay flat:

Here is what it looked like when all of the seams of the hexagon were joined:

There are a total of 55 single crochet stitches made to join the pentagon to the ring of hexagons.

Once I had joined the 3 panels, I used the diagram shown at the beginning of this page as a guide to laying out my panels and remaining hexagons and pentagons. I used safety pins to join the sides to each other so I could keep better track, but I think it would have been less problematic to tie them together with scraps of yarn.

Once I had the hexagons and pentagons fixed to each other, I began joining the seams using the same principles and methods I used for the three panels.

This site uses Akismet to reduce spam. Learn how your comment data is processed.