As regular readers are aware, my son’s trumpet teacher has been a tremendous source of vintage yarn over the past two-and-a-half years.

The trumpet teacher’s mother (now deceased) was an avid crocheter, and when a debilitating degenerative disease left her unable to continue to pursue her craft, I did what I could to put the materials she had purchased to use.

So today, when we arrived at my son’s lesson and the trumpet teacher said he had something to share with me that he thought might be of interest, I was curious as to what it could be.

My curiosity was soon both slaked and further piqued when he showed me this envelope addressed to his grandmother:

As I wrote in my Crochet Manifesto of February 29, 2011, “Crochet connects the past to the future,” and I have become one of the links in a chain of crocheters that stretches as far as Ruthven, Iowa, where another link in this chain of crocheters, the trumpet teacher’s grandmother, Lillie Simington, lived.

The envelope was like a semi-sacred artifact from days gone by.

While the front was addressed to Lillie Simington, RR, Ruthven, Iowa, from Needlecraft Service in New York, New York, the back of the envelope shown here:

If you ordered two or more patterns, they may not arrive at the same time, as they are mailed in different envelopes. — Thank You!

Contained within the envelope was a crochet pattern for a cape in both a woman’s and a children’s size:

which included these illustrations that describe the capes:

along with this photo of a sample of the stitch pattern that is used in making the capes:

In addition to directions for the pattern, some space was reserved to advertise other craft pamphlets that might be of interest to someone who would want to crochet a cape: 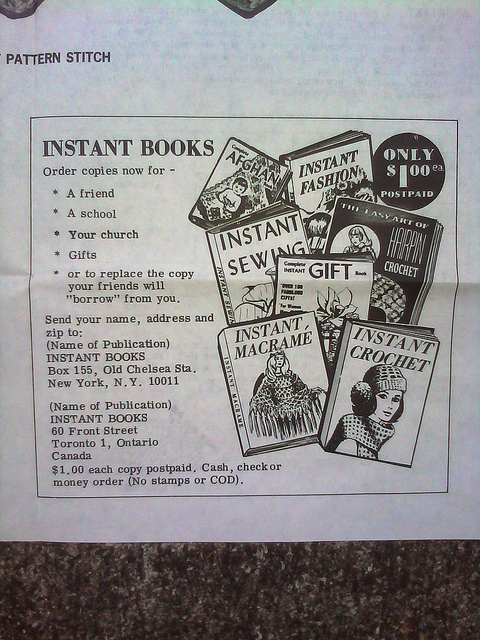 I don’t know if the trumpet teacher’s grandmother ever got to make this cape, but as soon as I get a few projects finished up, I am definitely going to take hook to yarn, and make at least one for myself.