If I chose all of my projects, I probably not be working on my current project; it would seem that sometimes a project chooses us. Such is the case for me with the off-white textured afghan that I think of as my “adventure in vanilla.

My first foray into this project was many years ago when I was unable to completely decipher the directions or the design, but coming to the project a decade later, I have now developed the skills to read the directions and understand the underlying principles of the project’s design.

Built on this central motif:

Here is my first medium square which I completed this morning, next to four additional small squares I made for what will form the core of what will be the second medium square: 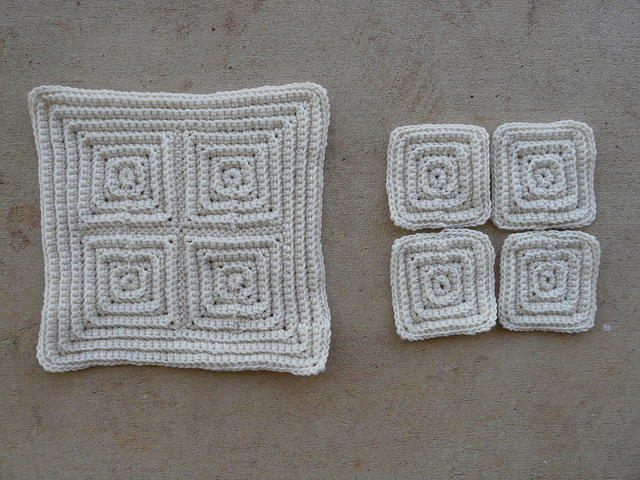 Here I have joined the four small squares into two strips:

and here, I have joined the two strips into one square which is now ready to be edged and made into yet another medium square:

Once I complete four medium squares, those square will then be joined and edged to form a large square.

Finally, the four large squares will be assembled and then edged to form the completed afghan.

There are still quiet a few stitches between now and the end of this project, but I am looking forward to all that I will learn along the way.

Video Tutorial: How to make the crochet textured square/magic motif

6 thoughts on “The adventure in vanilla continues”